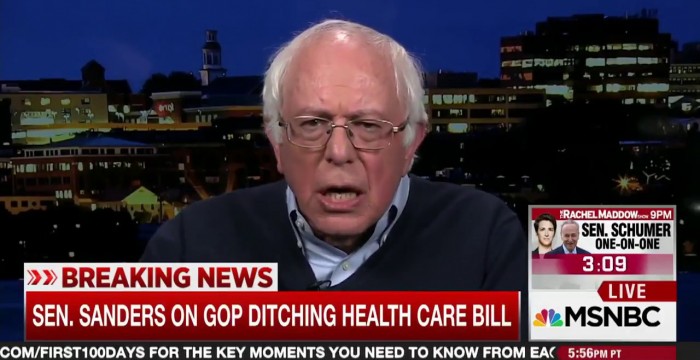 Senator Bernie Sanders appeared on MSNBC with Chris Hayes to speak about the recent “American Health Care Act” that was originally proposed by the Republicans to “repeal and replace”, however the vote never took place. The House Republicans were very divided on this bill because many Republicans felt that it was simply a watered down version of Obamacare, which some called “Obamacare-lite” or “RINO-Care”. President Trump pressured the Republicans to pass the bill, threatening that if they failed to pass, he would simply move on to other issues and leave Obamacare in place. Speaker Paul Ryan was forced to tell President Trump that he simply could not garner enough votes, and as a result, they decided to simply not have a vote on the bill. Senator Sanders was speaking on how it was a ‘victory’ that the GOP healthcare bill did not pass because 24 million Americans would lose insurance. While Senator Sanders was very happy that the GOP healthcare bill did not pass, he made sure to make it clear that this is not a stable position. Senator Sanders explained that they need to move in the direction of a single-payer healthcare plan. “Somehow or another they manage to provide healthcare to every man, woman, and child in their country at about half the cost that we do”. He continued, “Somehow the cost of prescription drugs in Canada is a fraction of what it is in the United States.” After explaining that the Canadians are able to have healthcare for all of their citizens, they also have an extremely lower cost for their healthcare than citizens of the United States of America do, he went on to explain how it is possible to bring in a single-payer, medicare for all system to the United States. “.. and move forward toward a medicare for all, single-payer program, and I’ll be introducing legislation shortly to do that.” As many had dubbed this Republican healthcare plan “Trumpcare” or “Ryancare” many are now dubbing this single-payer, medicare for all plan as “Berniecare”. Many Americans who voted for Bernie Sanders are extremely excited that he will be proposing this legislation because they believe that healthcare should be treated as a right, not a privilege. Bernie Sanders Healthcare. Bernie Sanders Single Payer. Bernie Sanders Medicare For All. Bernie Sanders MSNBC. Bernie Sanders MSNBC Chris Hayes. Bernie Sanders Chris Hayes MSNBC.
—
Connect With The Host!

– CHECK OUT MY ARTICLES: