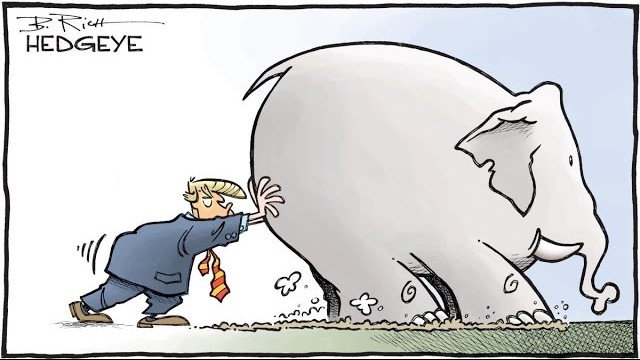 House Republicans voted 60 times to repeal Obamacare when their sole strategy was to obstruct the White House.

But now that they’re in control of all three branches of government, Speaker Paul Ryan couldn’t even win the support of his own party for his healthcare bill.

“Grassroots protests erupted across the country, citizen activists hitting the phones and constituents berating congressmen at town hall events… The non-partisan Congressional Budget Office estimated that the AHCA would lead to 24 million fewer Americans having health insurance over the next 10 years.”

The president says he wants to move on and allow Obamacare to implode all by itself. But this approach probably isn’t going to work out for him.

You see, the CBO report finds “the Obamacare markets will remain stable over the long run, [even] if there are no significant changes.” But the ACA still has some major flaws. Among its biggest are the law’s complexity and how 28 million Americans are still left uninsured.

Which leaves the president an opportunity to work across party lines and expand Medicare for all.

“Part of the appeal… is that single-payer systems reduce financial incentives that generate waste and abuse. Mr. Ryan insisted that by relegating health care to private insurers, competition would lead to lower prices and higher quality. Economic theory tells us that this is a reasonable expectation when certain conditions are met. A crucial one is that buyers must be able to compare the quality of offerings of different sellers.”

But under the current system, consumers can neither shop by price, nor really even understand what they’re buying.

What’s more, private insurers often spend 10 times as much as Medicare on administrative costs — like corporate salaries and marketing.

This isn’t just some liberal fantasy. Even one of the president’s top allies Newsmax CEO Christopher Ruddy is advising him to abandon the GOP plan and consider Medicare for all.

The president owes his political success to bucking the establishment. If he’s serious about to salvaging what’s left of his agenda, he’ll have to make good on his promises of “insurance for everybody.”

Why it's time to expand Medicare for all