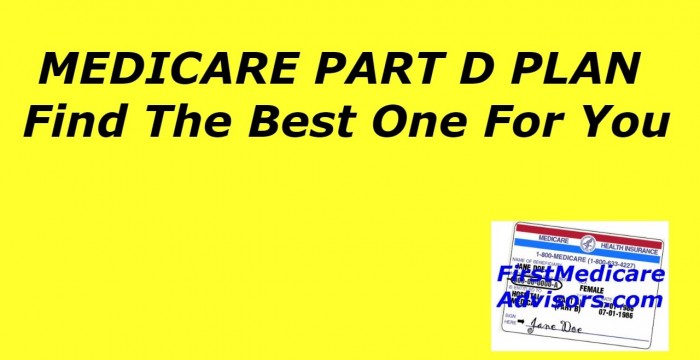 In this video, we are going to talk about Finding your personal best Medicare Part D Prescription drug plan. I’m going to be giving you 2017 dollar amounts and costs to illustrate points.

You absolutely should sign up for Medicare Part D when you enroll in Part B. Do not wait even if you don’t take any prescription drugs right now. If you wait until later to sign up, you will be charged extra on your premium for every month that you waited. The amount of the premium penalty changes every year. In 2017, you will be charged one percent of $35.63 for every month you are late in starting Part D.

The only way to avoid this penalty without signing up for Part D is having equivalent drug coverage, called "creditable" coverage, from another source, such as a group health plan. Your plan administrator can tell you whether your plan is equivalent.

By the way, COBRA does not count for creditable coverage. It’s not considered an employer type plan.

The average Part D plan costs about $35 a month but prices can vary. In general, if you buy a plan with a higher premium, you will pay less out of your own pocket when you use the plan. If your 2015 income was above $85,000 for a single person or $170,000 for a married couple filing jointly, you will be charged extra for your Part D premium in 2017.

Most plans sort your drugs into 5 different "tiers," with drugs in the lower tiers costing you less.

Let’s discuss the three coverage phases for Part D. You can think of your Part D "coverage year" as divided into three phases that come in order. If you don't take a lot of costly drugs, you probably will never get out of the first phase.

Phase 1: Initial coverage
In 2017 you will pay an average of 25 percent of the costs of your medications until you and Medicare together have spent $3,700. But that's only an average. Your personal share of expenses might be different depending on whether your plan has a deductible, how many drugs you take, and how much your drugs cost.

One part of the Affordable Care Act created a schedule for closing the donut hole. It is about half-closed now and will be eliminated as of 2020. Then there will be only two coverage phases in a year.

Depending on where you live, you might have dozens of private plans to choose from, with different premiums, co-payments, and levels of coverage, including which drugs are covered.

Choosing a plan that is right for you can save you thousands of dollars per year in premiums and out-of-pocket drug expenses. It pays to review your Part D coverage every year at open enrollment, especially if you have started taking new drugs.

Also, if you have limited financial means you may be able to qualify for Extra Help from Medicare to pay your Part D premiums and out-of-pocket drug costs. The financial and asset limits for 2017 are:
You must an annual income of less than $17,820 and financial resources, not counting your primary home, of less than $13,640.

Now, once you have completed the plan finder, then you will need to speak to a drug plan representative at Medicare. Be sure to have your drug plan ID number handy when you call. You can call them at 1-800-633-4227. They are available 24/7 and can help you chose the best possible plan based on your personal drug formulary.