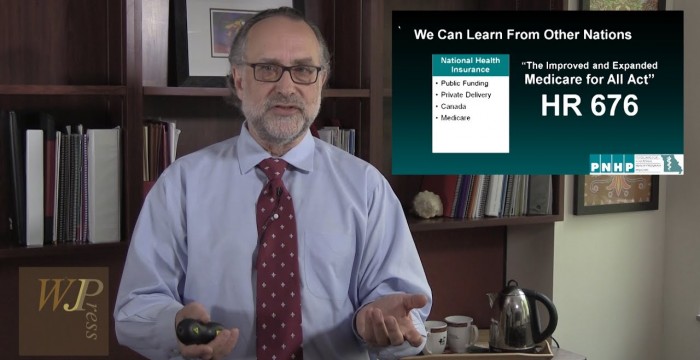 COLUMBIA, MO – Dr. Ed Weisbart, MD, President of the Missouri chapter of Physicians for a National Health Program makes the case for a single-payer healthcare financing system through the expansion of the Medicare national health insurance program to all Americans.

Medicare is an efficient healthcare financing system for Americans 65 and older which could be expanded to all ages in order to restructure the inefficient private insurance financing of healthcare.

Redirecting dollars now paid by individuals and employers as private insurance premiums into a more efficient national health insurance fund could bring down healthcare costs by up to one third almost immediately as the massive administrative costs of the private insurance system are streamlined into a single-payer model of healthcare financing.

CLARIFICATION: In the video the date of the 'signing' of the HMO Act was mentioned as 1971 but was actually signed into law in 1973. President Nixon embarked on the HMO strategy in 1971, and HMOs were initially authorized, in 1971. So a more accurate description of the point would be that the United States began our managed care experiment in 1971, not that the bill was signed in 1971.