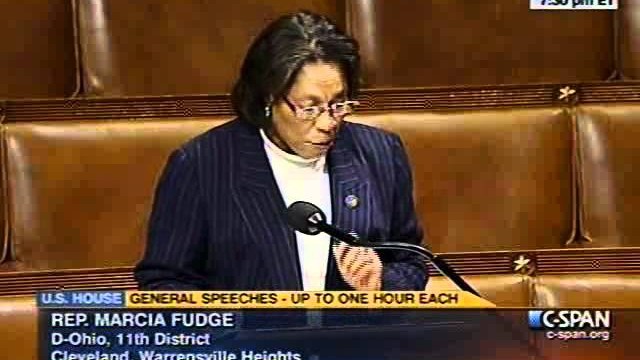 Representative Marcia L. Fudge: Mr./Madam Speaker, I rise to address the devastating impacts that the Republican budget would have on the middle class and American workers, as well as students, seniors and the poor.

A budget is a reflection of priorities; it exemplifies objectives and goals.

The Republican's priorities are clear: cut taxes for the most wealthy Americans, while achieving deficit reduction solely through drastic spending cuts to Medicare, Medicaid, SNAP and other important programs. The Republican budget would abandon the economic recovery and implement policies that ship American jobs overseas. It would assume deep cuts in transportation spending next year, ignore job creation, and reject sensible proposals for economic growth and future competitiveness.

The Congressional Black Caucus will present a budget this week that would protect seniors who rely on Medicare, the disabled who need Medicaid, and the unemployed who would go hungry without SNAP. It would support our economy through investment in transportation and infrastructure, and encourages American innovation.

In addition, the Republican budget would fail our students by proposing drastic cuts that would devastate education funding and increase costs for college students. It would allow higher interest rates on student loans starting this July, and eliminate the income-based repayment plans that help graduates manage their loans. In contrast to the Republican budget, the CBC budget would increase the maximum Pell Grant by nearly $1000 and invest an additional $25 billion above the President's budget in Education and Job Training in FY 2013 alone, alleviating state and local education budget cuts and protecting jobs for teachers.

Even the middle class is not spared from Republican cuts.

The Republican budget would outsource jobs through tax policies. It would actually encourage multinational companies to ship thousands of jobs overseas, while costing the American economy billions of dollars. By contrast, the CBC budget would ensure that Wall Street bankers pay the same tax rates as working Americans by taxing carried interest, dividends and capital gains as ordinary income. The CBC budget would close corporate tax loopholes, adding approximately $1.3 trillion in revenue over 10 years.

Just like last year, The Republican budget would end the Medicare guarantee and shift costs to seniors. Rather than having guaranteed coverage of benefits, seniors would receive a voucher. Yet, the voucher will not grow as quickly as health care costs — simply shifting costs onto seniors.
As AARP pointed out, "The premium support method described in the Republican proposal … would likely 'price out' traditional Medicare as a viable option, thus rendering the choice of traditional Medicare as a false promise."

The CBC budget would support our seniors, working Americans and the middle class. And the CBC budget will reduce the deficit by an additional $3.4 trillion as compared to the President's budget over the next decade. The Republican budget would repeat last year's attempts to drastically reduce SNAP, or the food stamp program, for struggling families. It would slash SNAP funding by roughly $130 billion over 10 years and completely eliminate categorical eligibility. SNAP is currently serving 47 million people, nearly three-quarters of whom are families with children. Throwing people off the roles would make it practically impossible for people to afford a nutritionally sound diet. For two years in a row, we've seen Republican priorities and the Republican vision for the nation.

I urge my colleagues to support the budget presented by the Congressional Black Caucus and vote no on the proposed Republican budget.