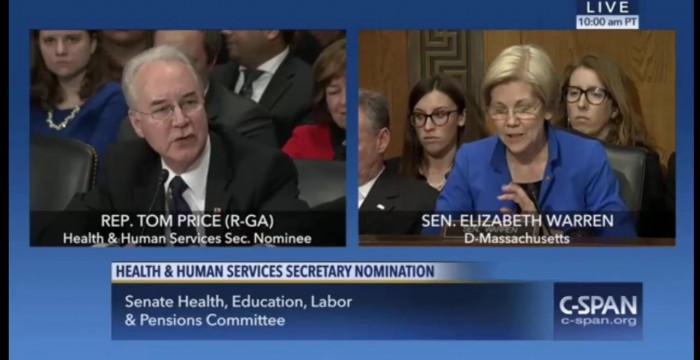 In a contentious hearing Wednesday, Sen. Elizabeth Warren (D-MA) grilled Rep. Tom Price (R-GA) — Donald Trump’s nominee for Health and Human Services secretary — over his proposal to cut to cut funding for Medicare and Medicaid, as well as his introduction of legislation that directly benefitted a company he held stock in. Noting that more than 100 million Americans receive healthcare through the federal programs Medicare and Medicaid, Warren asked Price if he hopes to cut Medicaid funding by more than $1 trillion dollars, as his 2017 budget proposal suggests. Price did not directly answer whether he proposed the trillion dollar cut, instead arguing the “metrics” of success for Medicare and Medicaid are “not necessarily the amount of money” put into the programs. Warren refused to let Price dodge her question. “It’s a yes or no,” she pressed. “Did you propose to cut more than a trillion dollars out of Medicaid over the next ten years?” “You have the numbers before you,” Price shot back. “I’ll take it as a yes,” Warren replied. The Massachusetts senator then referenced Donald Trump’s campaign pledge not to cut funding to Medicare and Medicaid, asking Price if he can “guarantee” he “will safeguard president-elect Trump’s promise” regarding funding for those programs. Price, once again, dodged the question. “Your question presumes that money is the metric,” Price began. “I’m sorry to interrupt but we’re very limited on time,” Warren replied. “The metric is money.” “Frankly, the millions of Americans who rely on Medicare and Medicaid today are not going to be reassured by your notion that you have some metric other than the dollars that they need to provide these services,” she continued, noting “Americans will be watching” to see if Price reneges on Trump’s campaign promise. Warren then pressed Price about his stock holdings in Zimmer Biomet, a medical device manufacturer that made several contributions to Price’s reelection campaign. In March 2016, six days after purchasing stock in Zimmer Biomet, Price introduced legislation in the House that directly benefited the company. Warren took issue with Price’s argument that he was not the one “making those decisions” to buy stock in the company, noting the HHS nominee did not use a blind trust or passively managed mutual fund. “So let’s just be clear, this is not just a stock broker, someone you pay to handle the paperwork,” Warren began. “This is someone who buys stock at your direction. This is someone who buys and sells the stock you want them to.” “Not true,” Price said. “Because you decide not to tell them” Warren asked. “Wink, wink, nod nod, and we’re all supposed to believe that?” The Massachusetts senator then asked Price directly if he took actions to benefit a company he owned stock in. “I’m offended by the insinuation, senator,” Price replied.Elizabeth Warren GRILLS Tom Price at Senate Confirmation Hearing 1/18/17. Senator Elizabeth Warren (D-MA) blasted Donald Trump's nominee to become Secretary of Health and Human Services over his desire to drastically cut essential services, including Medicare and Medicaid. Warren reminded Rep. Tom Price (R-GA) that Donald Trump himself promised he would not cut those core safety net programs. After informing Rep. Price "more than 100 million Americans now receive their healthcare through Medicare and Medicaid," Sen. Warren reminded Rep. Price the budget he authored as chair of the House budget committee would have cut spending on Medicaid by $449 billion over the next decade, and would have cut Medicare by more than $1 trillion Price's response? The "metrics" used to determine success of these programs should not be dollars. That prompted a heated exchange, with Senator Warren slamming a combative Price, then reminded Rep. Price that "President-elect Trump was very clear about his views on Medicare and Medicaid." "Can you guarantee to this committee that you will safeguard President-elect Trump's promise and while you are HHS Secretary you will not use your authority to carry out a single dollar of cuts to Medicare or Medicaid eligibility or benefits?" Warren asked. "What the question presumes is that money is the metric," Price responded. "In my belief from a scientific standpoint, if patients aren't receiving care even though we're providing the resources, it doesn't work for patients." Warren was not buying what Price was selling. "We're very limited on time," she reminded the nominee. "The metric is money. And the quote from the President-elect of the United States was not along this to cut dollars from this program. So that's the question I'm asking you. Can you assure this committee you will not cut one dollar from Medicare or Medicaid should you be confirmed to this position?" "I believe that the metric ought to be the care that the patients are receiving," Price insisted. "I'll take that as a no," Warren retorted.

Elizabeth Warren RIPS Tom Price for Wanting to Cut Over a Trillion Dollars From Medicare, Medicaid

87 thoughts on “Elizabeth Warren RIPS Tom Price for Wanting to Cut Over a Trillion Dollars From Medicare, Medicaid”