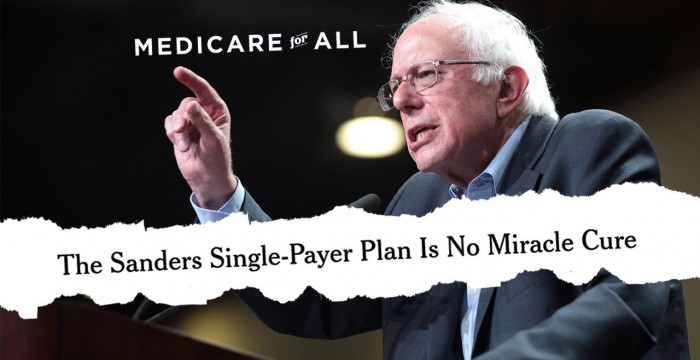 Senator Bernie Sanders (I-VT) thinks Medicare for all will solve all of our healthcare woes. But the truth is that it may be catastrophic.

Reason is the planet's leading source of news, politics, and culture from a libertarian perspective. Go to reason.com for a point of view you won't get from legacy media and old left-right opinion magazines.

Bernie Sanders, the independent senator from Vermont, can't stop talking about Medicare For All which he says will finally solve all of America's health insurance problems.

In fact, creating a national single-payer plan is a truly terrible idea that will likely bankrupt the country, drive down the rate of health-care innovation, AND not really improve health outcomes.

Established in the late 1960s, Medicare is the nation's health-insurance program for people 65 and over. It is a single-payer system—the government pays participating service providers–and it's also the single biggest driver of the national debt. The taxes levied to pay for the program don't come anywhere close to covering its costs and the number of beneficiaries is expected to grow massively over the coming decade. Payroll taxes and premiums paid by beneficiaries pay for less than half the program's costs, which are expected to double from $700 billion per year to almost $1.4 trillion.

Sanders has proposed a 7.5 percent payroll tax and a new 4 percent tax on income to pay for his plan, but it's not at all clear that such hefty new taxes would come close to covering its costs, which are unknown. This much we know: His home state of Vermont pulled the plug on a less generous universal plan after it became clear that an 11.5 percent payroll tax and a 9 percent income tax wouldn't cover costs.

For all the problems with the U.S. health care system, it sets the pace for innovation and new treatment options in a way that no single-payer system on the globe does. That's because innovators can expect to earn back the cost of developing new treatments in a way that's foreclosed by most single-payer systems, which inevitably come with all sorts of price controls that discourage new products and services *and* rationing that reduces access to the same.

Does having health insurance mean you'll be healthier? That's the implicit promise of Bernie Sanders' Medicare For All program—and Obamacare too. But surprisingly, the evidence for this is thinner than you might think. The two big studies on the link between having insurance and actual health—one conducted by the Rand Corporation and one by the state of Oregon—suggest that merely having insurance doesn't lead to better outcomes. Having insurance can relieve financial and emotional stress, but it's not exactly clear that it will leave you physically better off.

All of which makes the case against expanding Medicare to all. If single-payer couldn't even make it out of Bernie Sanders' home state of Vermont, there's no reason to try it out on all of America.

Why Bernie Sanders' Medicare for All is a Bad Idea