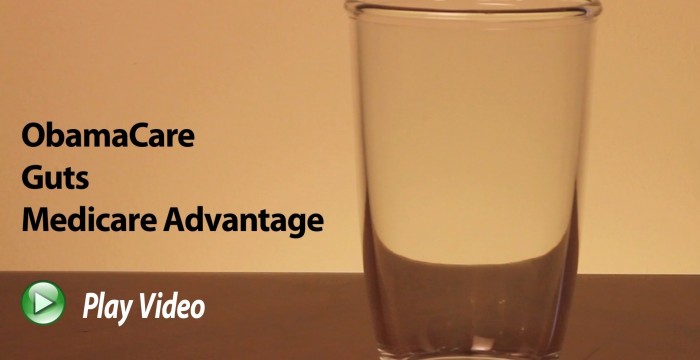 To make sure seniors don't notice that Medicare Advantage is being drained to fund Obamacare, the Obama Administration decided to take extralegal action to offset 71% of the cuts this year. But what happens after November 6th? The program ends and Seniors on Medicare Advantage feel Obamacare's cuts.

Republican Rep. Darrell Issa has threatened to subpoena the Department of Health and Human Services if it does not turn over documents by Thursday on a program he claims is being used to "buy" the election by hiding the effects of ObamaCare.
Issa, the chairman of the House Oversight and Government Reform Committee, made his demands in a letter late Wednesday to Health Secretary Kathleen Sebelius. His office effectively is accusing the department of stringing them along in their months-old request for documents about an $8 billion program that pays bonuses to Medicare Advantage plans.
"Your staff has run out of excuses and the long delay in providing these documents is inexcusable," Issa wrote, in the letter obtained by FoxNews.com.
Issa claims the bonus program is being used to mask the first round of Medicare Advantage cuts in connection with the health care overhaul — in order to win favor with seniors. He said in a recent letter that "the only plausible explanation" for the program is that it's being used as a "temporary bandage" to cover up cuts, "realizing the political danger" of those cuts in an election year.
The program in question is called a "demonstration" project. But Issa's office complains the project is far more sweeping than a run-of-the-mill test program, and conveniently lasts until 2014.
The congressman further says the effects of ObamaCare's $200 billion in Medicare Advantage cuts over the next decade would have been felt starting this week — if not for the bonus payments. Thanks to them, he wrote in an August letter, the project offsets 71 percent of the cuts this year.
"What they're really doing is trying on the eve of an election not to have seniors realize that the cuts to Medicare Advantage were real," Issa told Fox News in an interview earlier this month.
But the department, while saying it is reviewing Issa's letter, portrayed the program differently.
"The quality bonus payment demo is providing incentives to more (Medicare Advantage) plans to improve care, giving more patients high-quality choices in the program," the department said in a written response to FoxNews.com. "It is consistent with previous demos."
Earlier this year, the Government Accountability Office recommended that the Obama administration kill the bonus payment program — questioning the legal authority behind the system.
In his Wednesday letter to Sebelius, Issa described how Health and Human Services officials repeatedly claimed they were working on his committee's request for documents. According to the letter, they told the panel on Oct. 3 they were "aiming for tomorrow" and "the copying machines are working overtime."
The documents have not been turned over. Issa, in his letter, set a deadline of 5 p.m. ET on Thursday for meeting his demands — or else the committee will move to subpoena.
The letter was also signed by Rep. James Lankford, R-Okla., who chairs an oversight subcommittee.