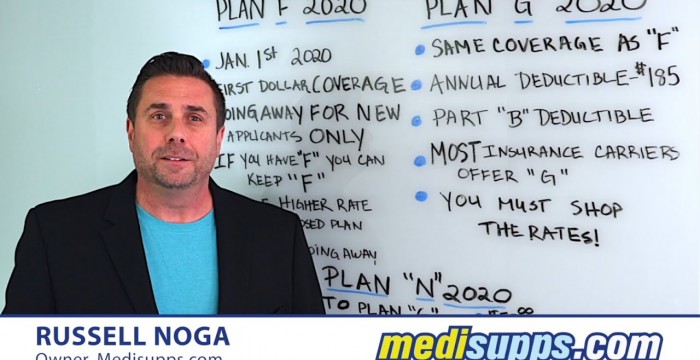 Most people are confused about the changes coming up in Medicare supplement plans for 2020. They’re not sure which plan they should go on, if they should change plans, or what company they should go with.
There are some people including our clients, that know exactly where to be though. I’m Russell Noga with , stick around and I’ll help you decide what plan is best.
Now the biggest change in Medicare supplement plans for 2020 is the fact that Medicare supplement Plan F is going away. So if you’re eligible for Medicare on January 1st of 2020, or later, you will not be allowed to enroll in a Plan F. That’s not necessarily a bad thing actually there are better options. If you have a plan F currently, you’ll be able to keep your plan. And everything will be the same, the same coverage, stay with your same company, you can shop rates for a different company, and you can still stay within Plan F.
Now the reason this plan is going away, is because it has what is called “first dollar coverage”. Now what that means is there are no deductibles, and no copays that you would have to pay, and this gets very expensive so they are eliminating the plan. Plan C is also going away, but there’s not nearly as many people on that plan as there are on Plan F. Again, if you’ve got Plan F you can keep it. The question is “do you want to?”.
Now there are really only a few different reasons why you would probably want Plan F. One of them is maybe you got Plan F in a guaranteed issue period where that was one of the few plans that you could get with no medical underwriting. Another reason that is somewhat popular but not quite as common is that with a Plan F, if you never want to see a medical bill, and you’re willing to pay extra for it, then Plan F would make sense. We do have some clients that are like that.
But there are better choices, one of them being Medicare Supplement Plan G which happens to be the most popular plan and has been for years. In fact we almost never write Plan F anymore. But the biggest concern with Plan F you may have heard is you might get higher rate increase because the plan is closing. Rate increases are dictated by new premiums coming in versus claims being paid out. Well with no new premiums coming in and only claims, they’re going to have to adjust the rates to compensate for that. Now we have history to sort of see if this will actually happen. Back in 2010, Medicare supplement plan J went away. Now, aside from just one part of the country with one particular company Plan J for the most part has gone up significantly in the rates. In fact I talked to a gentleman last week who had it and he was close to $400 dollars.
Can we expect the same thing with Plan F? It’s pretty likely actually. We don’t know, nobody knows not even the insurance carriers, but I wouldn’t recommend Plan F anyway even if it wasn’t going away. Because, we have Medicare Supplement Plan G.
So let’s talk about Medicare supplement Plan G. Now Plan G is almost identical to Plan F, except you pay the annual Part B deductible each year. Plan F pays that for you. Now this year that deductible is $185. The problem with you folks on Plan F is, you’re paying far more than $185 for them to pay the deductible for you. So you’re actually giving them money, to write a check with your money. Extra money which you could put back in your pocket.
That is why we haven’t recommended Plan F for quite some time now. On Medicare supplement Plan G you pay that $185 deductible yourself, after which it pretty much turns into a Plan F. You have 100% coverage. But you save money on the premiums. And for those of you turning 65, Plan F is going away anyway. But once again I wouldn’t have recommended it. Now Plan G as well, Most insurance companies offer it. Now they all have the exact same coverage when it comes to Plan G or any of the Medicare supplement plans. But they charge different premiums for it.
Which is why I recommend you give us a call at 1-888-891-0229 or visit our website at Medisupps.com. There you can see quotes online, and of course within a couple minutes of a conversation we can give you all the rates and then see who has the best rates in your area. As well, if you’re coming off of Plan F and you want to shop for Plan G which I highly recommend, just give us a call or visit the website.
So we know that Medicare supplement plan F is going away, and Medicare supplement plan G is a fantastic option. Now there’s also another plan that’s going away aside from plan C, and that’s the high deductible version of Plan F. What’s replacing that, is a high deductible Medicare supplement plan G. I’m going to have a separate video on that so be sure to like and subscribe to this channel and you’ll be up-to-date on what that’s going to entail as well.
One other plan that is extremely popular out of these top three, is a Medicare
#medicare #medicaresupplements #medigap #planf #plang #plann