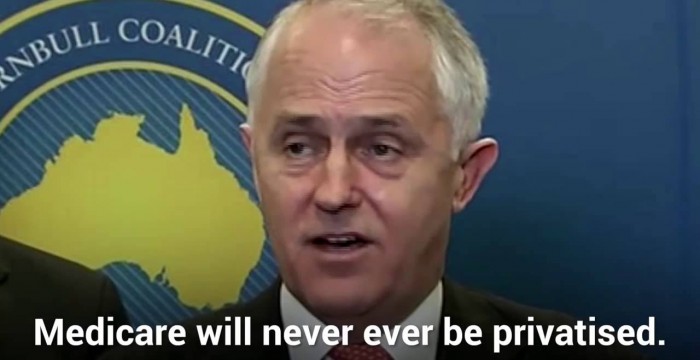 The Liberal Party is preparing on wrecking Medicare, shedding Australian jobs, and endangering the privacy of Australians by handing their medical records to private companies.
Several companies are understood to be circling for what could be one of the most lucrative government contracts in years. One of the organizations being discussed is Australia Post – itself on the list of potential asset sales.
That possibility has raised speculation that Australia Post could be deliberately "fattened" for market by gaining the extra commercial value of the Medicare and other payments contacts.
The politically risky move means billions of dollars currently disbursed through Medicare, Veterans Affairs, and the Pharmaceutical Benefits Scheme would be outsourced, with the new system geared for instant online transactions using smart phones and contemporary digital applications.

**Malcolm Turnbull and HIH / FAI and why he won’t have a Royal Commission into the banks…
HIH Insurance collapsed in 2001 losing an estimated $5.3 billion. One of the reasons often given for its collapse is that it bought another insurance company called FAI for $300 when it was actually worth nothing and losing money. Malcolm Turnbull at the time was the head of the Australian division of investment bank Goldman Sachs and was an advisor to FAI.
Most voters do not know but Malcolm Turnbull gave evidence
in the witness stand at the HIH Royal Commission in 2002 and he was later sued personally in civil proceedings by the HIH liquidator McGrathNicol. The reason Turnbull was personally sued was because of his dodgy conduct in his role as the managing director of the investment bank Goldman Sachs in advising FAI as it was taken over by HIH.

**Mr Turnbull has refused to answer numerous questions in relation to the $10 million grant he gave in 2007 to his friend Matt Handbury when he was the Environment Minister.
Mr Turnbull’s electorate fund-raising is done though an organisation he set up in 2007 called the Wentworth Forum. The SMH reported in 2009 “Regarded as the country’s most sophisticated political fund-raising machine, the forum offers membership packages that give the most generous supporters more opportunities to gain access to Mr Turnbull.”
“It costs $5500 to be a “member”, $11,000 to be a “sponsor”, $16,500 to be a “patron”, $25,500 to be a “benefactor” and $55,000 to be a “governor”.