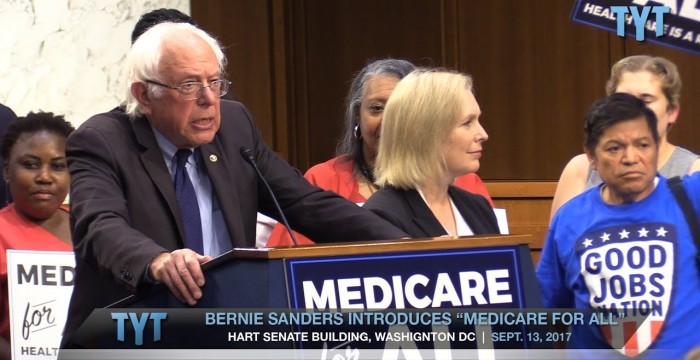 TYT contributor Ryan Grim (Twitter.com/RyanGrim) breaks down the fine print Sen. Bernie Sanders' Medicare For All bill, including a response to critics who ask, "But how are you going to pay for it?"

Ryan writes about this, with colleague Zaid Milani, for The Intercept:

The bill does not include an explicit funding mechanism. However, on Wednesday afternoon, Sanders’s office released a document laying out several options for financing the plan. The document is more or less a menu of various revenue mechanisms for the federal government to choose from. As the bill is debated in committee, Sanders said, senators can debate the various funding ideas.

The document also notes that Medicare for All would eliminate various tax breaks that currently subsidize our current health financing system. This would raise $4.2 trillion over a decade.

Then there’s a large list of non-health care related taxes: everything from making the estate tax more progressive to taxing large financial institutions to establishing a wealth tax on the top 0.1 percent.

Don't forget to tell us your thoughts in the comment section below!

Medicare For All: Here's How We Pay For It, Thanks for Asking!

64 thoughts on “Medicare For All: Here’s How We Pay For It, Thanks for Asking!”