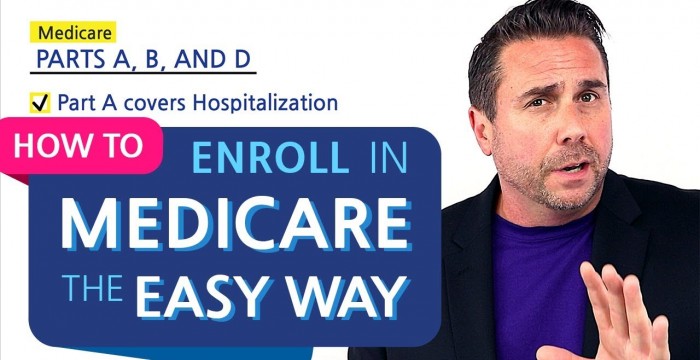 Understanding Medicare and enrolling in coverage is easier than you might think.
I’m Russell Noga, independent agent and owner of Medisupps.com and I’ll show you the easiest way to enroll in Medicare as well as cover additional options that you might want to consider once you’re enrolled.

Welcome to our New to Medicare video. Here I’ll be discussing the differences between the various parts of Medicare and how and when to enroll so you don’t miss any deadlines.

Now here are the different ways to enroll in Medicare. If you are drawing a Social Security check when turning age 65 you'll automatically be enrolled in both Part A and Part B Medicare. Medicare will send your card in the mail about three months prior to you turning 65.

If you do not want Medicare Part B at that time, for example you’re still working getting employer benefits you’ll want to fill out the card they provide and send it back to them and opt-out. Otherwise you will be enrolled in both Part A and Part B. Now then you can enroll in a Medicare Supplement Plan as well as a drug plan if you prefer.

Now if you are still employed and receiving health benefits from your employer and you don't wish to have Part B at this time then just let them know when you're enrolling Part A. Remember there is a monthly premium you’ll have to pay for Part B so you’ll want to avoid this as long as possible if you’re still get employer benefits.

Let’s talk a little bit though about what Medicare covers exactly.
You have “Parts” when it comes to basic Medicare but when we're talking about Medicare Supplement Plans we have actually plan letters. So let's start with the “Parts” of original Medicare which are Part A and B. There is also Part D which is a Drug Plan. Another thing is Medicare Part C, which is an advantage plan which we’ll talk about later.

Medicare Parts A and B are what's called Original Medicare. Part A covers hospitalization and Part B covers doctor’s services. So what you’ll hopefully be using the most of is just Part B for doctor’s appointments or anything outpatient.

Now there is no premium for Medicare Part A again that covers hospitalization. But you've paid that through employers taxes throughout the years.

Medicare Part B however, does have a month premium and it’s based on your income levels. That premium starts at $135.50 a month and can be paid quarterly if you’re not drawing a check or if you are drawing a Social Security check it would deducted monthly.

Now as I mentioned Medicare Part B covers doctor’s services however it does not start paying until a deductible is met. This is called the annual Part B deductible and it’s once-per-year.

Part A has a deductible but it’s paid by most of the Medicare Supplement Plans.

After the Part B Deductible is paid Medicare Part B will pay 80% of your Medical bills. Now you are responsible for paying the remaining 20%. Now this is called “co-insurance”.

So these deductibles, as well as co-insurance, are called the “gaps” in Medicare. That just means the expenses that you're required to pay. That's actually where the term Medigap comes from. Now, Medigap Plan and Medicare Supplement Plan are the same thing.

You have Medicare Part A and B which cover hospitalization and doctor’s services also known as Original Medicare. Because Part A and B do not cover everything, they have what’s called "gaps" or expenses that you are required to pay.

Part A and B also do not cover prescription drug coverage so if you do need that you'll need to enroll in what's call a Part D Drug Plan.

Medicare Enrollment : How to Enroll in Medicare the Easy Way

15 thoughts on “Medicare Enrollment : How to Enroll in Medicare the Easy Way”