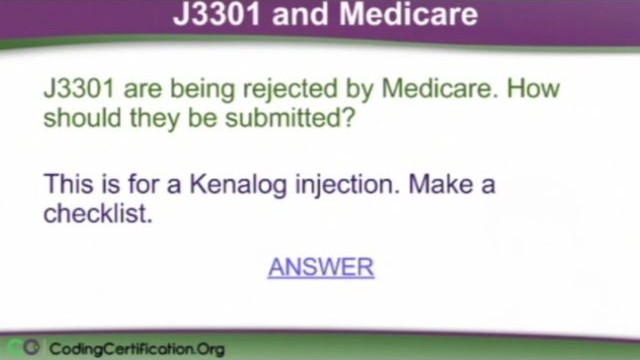 This is like HCPCS code, J3301. They were having problems with it being rejected. This is actually for Kenalog.

What Kenalog is a Triamcinolone cream or not cream. I think Triamcinolone cream, you can get that over the counter. You may know what that is or not. But getting reimbursement for this code can give you some problems. We saw several things pop up in some other forums about people trying to get payment for that. One of the things you need to note though is that this is an injection you cannot get paid unless you also used the administration code. Now, not knowing which administration code you're going to use, you might use 96372. I had a student that actually uses this code and she said a few times, they've tried to submit it and they left off the administration code. They always use 96372. She's got it memorized now because they use it so often. But make sure that you include that.

Some other things to keep in mind, the description. Several people stated that it needs to Triamcinolone or Kenalog because Medicare will not take a code that's unspecified. And even though it says it's for Kenalog but it also states in the description, unspecified so it has to be spelled out. One person mentioned that you can put it in the other line. There's different forms that you use for this and so I didn't go into detail about that.

Let's see, scroll back up just a little bit there. Confirm that in fact, it's covered by your payer. One person had submitted a question and it stated, "Medicare said they weren't going to pay for that." And then another person said, "But Medicare.." when she called said they would. So it probably is in fact covered but if it's not covered, it might be because you need to confirm the diagnosis if Kenalog is not used for the diagnosis that the patient's given. Medicare's going to boot it out or your payer's going to boot it out.

The other thing, the treatments, something else that was mentioned that was interesting. If this injection is given, for example, 3 times in 3 months, Medicare may only pay for one injection every 3 months. Now of course, I'm making that up off the top of my head. But you want to make sure, from your payer, you know what their guidelines are. How often will they pay for this injection and what is the treatment that is actually covered? Sometimes this can be a billing edit when all they're doing is coding the J3301. When you do that, just don't forget that you need the administration code, put the Kenalog or Triamcinolone in there and state what it is. Notice I didn't say the second word because I tend to pronounce that incorrectly. So you don't just assume how to pronounce that.

Scroll down just a tad the other way. I think that's about it. That was the checklist that I found. If you want to go and Google Triamcinolone or Google J3301, you can find some other interesting comments made about it. But it seems like this Triamcinolone really does give people fits. These are what the comment, feedbacks came back with that would benefit you in getting those paid. So it might be a good idea to make yourself a checklist when you're going to bill this and make sure you click off each thing for the Kenalog.