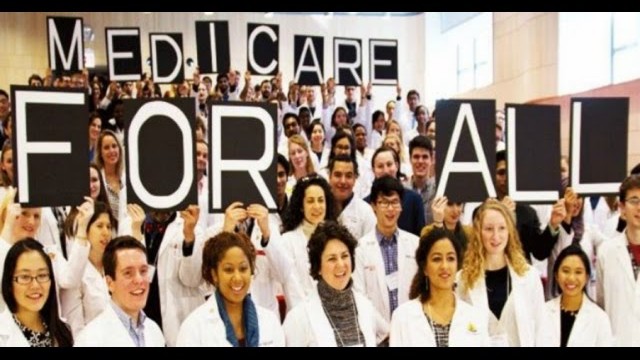 HOW THE GOP'S HEALTHCARE PLAN HELPS MAKE CASE FOR MEDICARE-FOR-ALL….

State efforts toward single-payer healthcare, like California's, could be bolstered by GOP's Medicaid-gutting proposal….

The GOP's new plan to repeal and replace the Affordable Care Act (ACA) with something much worse merely supports the argument that the only way to achieve true healthcare reform is to enact a single-payer, Medicare-for-All system, advocates said this week.

"Instead of fixing the very real holes in the ACA—and moving forward to a permanent solution for our broken healthcare system, as could be done by expanding Medicare to cover everyone, at lower cost—the Republican plan moves us back, far back, to the worst vestiges of a profit-focused system based on ability to pay and widespread health disparities," said National Nurses United (NNU) co-president and registered nurse Jean Ross.

"GOP Care would … take us farther, not closer, to universal healthcare, a goal that is achievable only through single-payer reform."

Quote by Adam Gaffney, Physicians for a National Health Program…

To make matters worse, "the architects of the new bill have exploited the repeal and replace meme with paybacks to some of their wealthiest friends and donors," Ross added.

There is another way, as Ross' colleague and California Nurses Association co-president Deborah Burger argued in an op-ed on Monday. She pointed to the effort in her home state to "create a genuinely universal system for all Californians, with comprehensive covered services, no insurance networks that restrict patient choice of doctor, hospital or other provider, and no more copays, deductibles, or surprise medical bills."

That effort, the Healthy California Act or Senate Bill 562 (SB562), would declare it the "intent of the Legislature" to enact a law that would establish a comprehensive, single-payer healthcare program for all state residents.
According to Burger, the system would do so "[b]y pooling what the state already pays for healthcare services, using the power of a single-payer system to negotiate bulk discounts, and eliminating the waste and profiteering of the insurers."

The American Healthcare Act (AHCA) proposal put forth Monday by House Republicans only underscores the necessity of the California bill.

"Speaker Paul Ryan's plan to shred the Affordable Care Act is a hard-right wish list that will cover fewer people and cost more, and a huge step backward from our goal of universal healthcare," said California state Sen. Ricardo Lara, who introduced SB562 last month along with state Sen. Toni G. Atkins. "We need a way to cover the millions of Californians who will lose insurance or pay more under Republicans' plan, and that's what the Healthy California Act will do."

Indeed, NNU's executive director RoseAnn DeMoro added Tuesday, SB562 "could become the national model as an alternative to both the ACA and the fraudulently named GOP American Health Care Act."

Previous single-payer salvos have failed, in California and elsewhere. But, writing last week at the Los Angeles Times, reporter David Lazarus suggested: "Thanks to [President Donald] Trump and the Republican-controlled Congress, things are now very different…”

"We should give our great state governors the resources and flexibility they need with Medicaid to make sure no one is left out," Trump said in his speech to Congress this week.

What he and Republican leaders mean by that is giving states a fixed amount of Medicaid money in the form of block grants to cover low-income people. States currently are guaranteed at least $1 in federal funds for every $1 in state spending.

The Republicans' goal is for the federal government to pay less for Medicaid annually. But what they're also unintentionally doing is removing perhaps the biggest obstacle to California and other states establishing their own single-payer systems.

"If Republicans abandon California and Congress moves to cut Medicaid, we will insist that the federal government treat us like any other state and give us the flexibility and freedom to address the health needs of our entire population through a universal healthcare system," … Lara told the Times last week.

Medicaid would indeed be dismantled under the GOP's AHCA plan.

HOW THE GOP'S HEALTHCARE PLAN HELPS MAKE CASE FOR MEDICARE FOR ALL!!