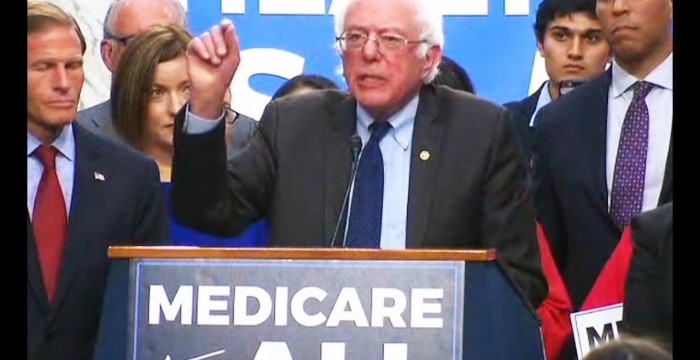 It's easy to support a bill you know won't pass under the current president. Time will tell if this support is genuine. Watch the full episode of Aggressive Progressives here:

"Bernie Sanders has for decades argued that the United States must establish a single-payer health-care system that provides the guarantee of care for all while controlling costs—what he calls a “Medicare for All” structure. So it came as no surprise that the senator from Vermont made single payer central to his 2016 presidential bid. What is striking, Now that the campaign has finished, however, what is striking is the burgeoning interest on the part of prominent Democrats in a reform that was once considered “too bold.” As Sanders prepared to introduce a detailed “Medicare for All” bill on Wednesday, Democratic senators from across the country and from across the ideological spectrum—including Elizabeth Warren of Massachusetts, Jeff Merkley of Oregon, Kamala Harris of California, Cory Booker of New Jersey, and Kirsten Gillibrand of New York—announced that they would be signing on as cosponsors."*

Fifteen Democrats Back Bernie's Medicare For All Bill. Do They Mean It?

32 thoughts on “Fifteen Democrats Back Bernie’s Medicare For All Bill. Do They Mean It?”