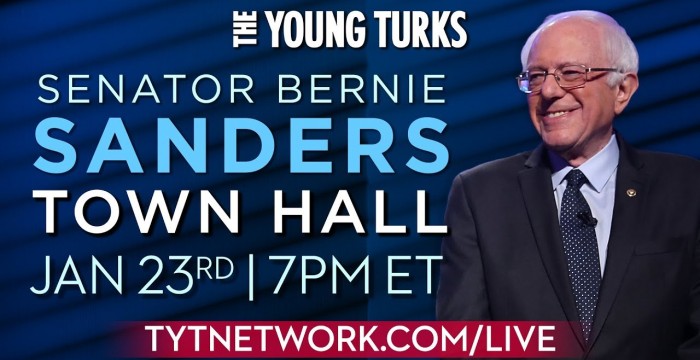 Senator Bernie Sanders is hosting a national town hall to discuss medicare for all on January 23rd at 7pm eastern, don't miss it live here on TYT. RSVP here:

With the introduction of the Medicare for All Act last year, Sen. Bernie Sanders and 137 of his colleagues in Congress began the long struggle to end the international embarrassment of the United States being the only major country not to guarantee health care to all its people. Already, 60 percent of the American people want to expand Medicare to provide health insurance to every one, but many Americans still do not know how a Medicare-for-all, single-payer health care system would work in the United States.

To answer that question and more, Sen. Sanders and leading digital outlets NowThis, ATTN: and The Young Turks are partnering on a groundbreaking Medicare for All Town Hall event January 23 from 7 to 8:30 p.m.

For the first time, leading digital outlets will come together to do what cable channels and network news will not– engage in an in-depth conversation about one of the issues that matter most to Americans, their health care. Streamed live across multiple social media channels, Sen. Sanders and leading health care experts will take questions about Medicare for All from people around the country and discuss how universal health care would change the American system.

Seating is first-come, first-served. Please arrive early to ensure a seat. No posters or signs will be permitted.

"Sen. Bernie Sanders (I-Vt.), who has become one of the Democratic Party’s leading surrogates on television, is striking out with his own multimedia special — one that will run online, with no major network behind it.

“We expect that we’ll have a larger viewing audience for this live stream than we’d have if we’d run it on, say, CNN,” Sanders said in an interview. “That’s revolutionary. You can have this discussion even if the owners of the big media companies don’t want to have it.”

On the evening of Jan. 23, Sanders will host a 90-minute “national town hall” on proposals for universal Medicare, streamed by the progressive video outlets NowThis, Attn:, and the Young Turks. The idea came to him, he said, after appearing in CNN-hosted debates and forums on health care and taxes — experiences he’d mostly enjoyed — and hit a wall.

“I talked to a very well-known TV journalist, and I said: ‘You know, I think it’d be really great to have a town hall on single payer. You can design it however you want,’ ” said Sanders. “He said, ‘Bernie, that’s a great idea. We’ll run it up the food chain.’ I never heard back.”"