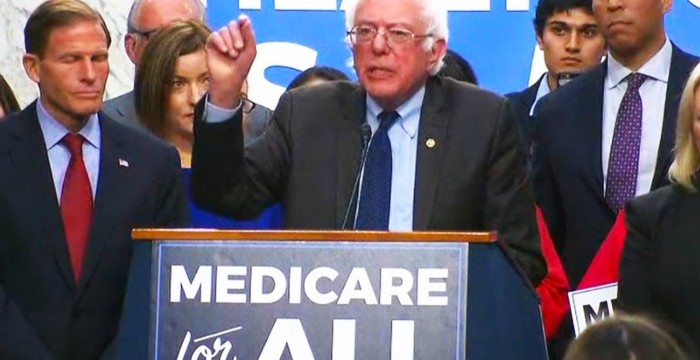 Bernie Sanders’ Medicare-For-All bill has been revealed. Ana Kasparian, Jimmy Dore, and Ron Placone, the hosts of The Young Turks, tell you what’s in it. Tell us what you think in the comment section below.

“Sen. Bernie Sanders (I-Vt.) unveiled Wednesday a new version of his plan to give everybody government-run health insurance, potentially opening a new chapter in the ongoing debate over how to make health care in the U.S. more affordable and available.

The plan calls for an overhaul of American health insurance with a souped-up, more generous version of Medicare replacing nearly all private health insurance ― and government exerting far more control over the cost of medical care. It would arguably be the most ambitious social welfare initiative in U.S. history, but Sanders told HuffPost in an interview Tuesday that he believes America is ready for it.

“The American people are catching on to where the Republicans are coming from, they see the limitations of the Affordable Care Act and they’re looking at the alternatives,” Sanders said. “And this is a rational alternative.”

Sanders has been waging a frequently lonely crusade for this kind of universal health care since the early 1990s, when he first came to Congress. In 2013, when he introduced a previous iteration of the bill, he had no support from his colleagues. But in a clear sign of the idea’s increasing popularity, as well as Sanders’ influence within progressive politics, 16 Democratic senators are co-sponsoring the bill.”