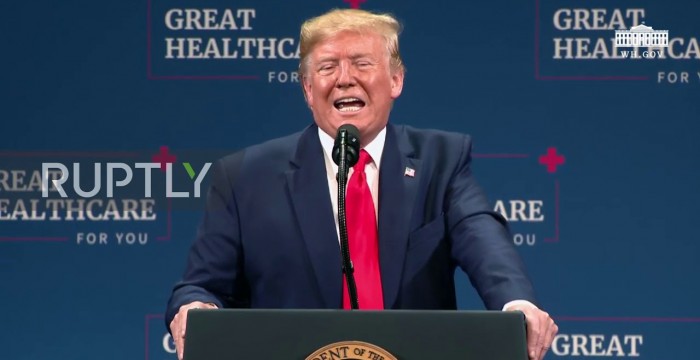 US President Donald Trump defended the Medicare program and accused Democrats of attempting a "massive government health care takeover that would totally obliterate Medicare," during a speech in The Villages in Central Florida on Thursday.

In a pledge to protect Medicare, Trump stated that "as long as I'm president, no one will lay a hand on your Medicare benefits and that's what we're here to do today. This order is the latest step in my administration's drive to ensure the world's best health care for all Americans," in reference to an executive order he later signed to bolster health care plans for seniors.

The US president later slammed the Democrats again for the impeachment inquiry against him, stating that the reason behind it is "because they know they can't beat us fairly."

Trump is alleged to have asked Ukrainian President Volodymyr Zelenskiy to find damaging information on the business dealings of Hunter Biden, the son of Democratic presidential candidate Joe Biden during a phone call. Hunter Biden worked as a board member in a Ukrainian gas company between 2014 and 2019.

The Speaker of the US House of Representatives Nancy Pelosi announced an official impeachment inquiry into Trump over the allegations.