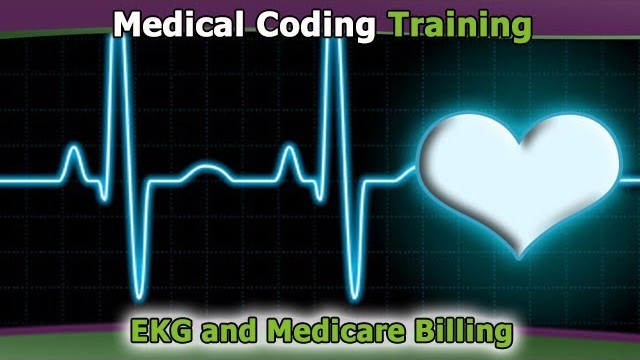 EKGs are what we we're going to talk about. Someone had asked about, they were having trouble getting their EKGs covered in the Medicare yearly physical, so they were billing annually for EKGs saying that the doctor and the patient had the understanding that EKGs were covered in the initial physical for Medicare. This is not true. An EKG is an additional test that's done if you have a condition that indicates it needs to be checked. What they're checking with the EKG is the rhythm of the heart.

I actually put a picture here. If you see the EKG machine, I knew some of you would understand. That's where they put the leads on you and have you lay still. And actually those red strips they always show at the hospital, how they used to hold up that ticker tape and they say something about the heart. If a person has bradycardia, tachycardia, A-fib [Atrial fibrillation]– those types of things; if they've had a previous heart attack in the past and didn't know about it, that actually shows up on these EKGs. So, that's why it would be done. If a person was having chest pain, even shortness of breath, they would maybe run an EKG. It's not a standard – I don't want to say it's a standard test. I mean, you have to have an indication for it; but it gives you a lot of information and it's a simple test to do and gives you information quickly to tell you if further testing need to be done. But it is not a part of the yearly physical for Medicare. Unlike if you have a cardiac condition, then it would be understandable that you would do that.

One of the places that you could go to check that out is CMS.gov and check Medicare. I actually put a link there. If you click on that Laureen, I hope the link works. When you go in there, I type in what will Medicare pay for, you know, yearly physical, what's covered? This is where it brought me. So, you could go in and see what the provider would be able to do for you for that yearly physical.

Then, go back Laureen, I think I cut out a comment and pasted it. This is what I found out. What tests are covered? Look where it says: Medicare Part B (Medical Insurance) covers a one-time screening EKG if you get a referral from your doctor or other health care provider as a result of – and it's going to say your condition. So, it's not that they don't cover EKG; it's that you have to ultimately show medical necessity to get an EKG done and have it reimbursed.

So, what you need to do if you're doing billing, again, billing is not something I am as good at; but I did call a couple of billers that I know. In fact, right tonight when I was coming back from Wichita, and they both indicated they had not heard that Medicare would cover that. Then, I went in and found that things change with Medicare so quickly. If I tell you today it doesn't cover it, you don't know that next week they won't. So what you need to do is you need to find out what Medicare will cover.

One biller told me that they're contracting out with a company, and of course I was on a cellphone in a car trying to get here, so I can't remember exactly what she said the name of the place was. It was like Nanagast or something; but they're contracted out, take care of their Medicare billing. She does the billing and then it goes through them and they kind of proofread it, I guess, this is what should say. They would be able to do.

So, if you're working as a biller, check with who you're contract with, find out what the details are and make sure you're up-to-date with that. I'm sure there're newsletters as well. Inform the doctor, inform the patient. A lot of times, if you're working in a private office, it's the responsibility of the biller and the coder to inform the patient of what's covered or not covered. So, if they come in and think they're getting EKG and they get one and it's covered, they're going to be upset when Medicare says they're not going to pay for that.
But, ultimately, with any procedure, make sure it's covered. I do in the HCC I do daily, the yearly physicals that are done for Medicare and never is an EKG on there, very seldom, lab work, stuff like that. Once or twice maybe when I do 80 a day, you might see one but the person has a past history of either an old MI, which is 412 by the way, or some type of A-fib… But they're going to have A-fib or some type of arrhythmia that will indicate that they needed EKG done. That's about it.

If you're getting denied, just follow up. Find out why. Get on the forums; ask them what's going on, the different coding forums. What's going on? Are you getting this paid? How are you getting it paid? What do I need to tell my doctor?