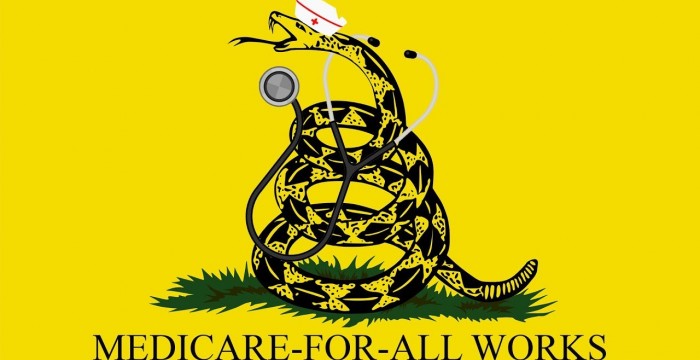 In this Majority Report clip, Sam Seder tells you how a Koch Brothers backed think tank just made the case for universal healthcare in America.

"Sen. Bernie Sanders' "Medicare for all" plan would increase government health care spending by $32.6 trillion over 10 years, according to a study by a university-based libertarian policy center. That's trillion with a "T."

The latest plan from the Vermont independent would require historic tax increases as government replaces what employers and consumers now pay for health care, according to the analysis being released Monday by the Mercatus Center at George Mason University in Virginia. It would deliver significant savings on administration and drug costs, but increased demand for care would drive up spending, the analysis found.

Sanders' plan builds on Medicare, the popular insurance program for seniors. All U.S. residents would be covered with no copays and deductibles for medical services. The insurance industry would be relegated to a minor role.

"Enacting something like 'Medicare for all' would be a transformative change in the size of the federal government," said Charles Blahous, the study's author. Blahous was a senior economic adviser to former President George W. Bush and a public trustee of Social Security and Medicare during the Obama administration.

Responding to the study, Sanders took aim at the Mercatus Center, which receives funding from the conservative Koch brothers. Koch Industries CEO Charles Koch is on the center's board."